In 1959, Triumph launched the Herald, a small sedan full of charm, the design of which was the work of Giovanni Michelotti, who would later design the TR4, TR5 and TR6, as well as the Spitfires and GT6, the latter two sharing with the 'Herald frame structure. It was available as a sedan, coupe, convertible, station wagon and van. The Herald will be produced until 1971 in 300,000 copies.

The much more powerful Vitesse was built from the same chassis from 1962 onwards, but which nevertheless retained the dimensions of the "little" Herald. The name "Vitesse" had already been used by Austin in ... 1914, then by Triumph between 1935 and 1938. Then, the term will be reused by Rover until 1998. In profile and seen from behind, the Vitesse could be confused with a Herald, but from the front, it was something else! Instead of a simple grille and two headlights, it had four "Chinese-style" front lights, like the Rolls Royce Silver Cloud III convertible of the 60’s.

Its engine was a 1.6-liter in-line six, then from September 1966, a 2.0-liter in-line six. This two-liter, which was also fitted to the GT6 convertible, developed a power of 94 horsepower, ie. the same as the MGB for the same weight. His torque was somewhat superior. Yet another resemblance: same wheelbase, same length and same width. And yet the two had nothing in common.

In 1968, the Vitesse became Vitesse Mk II until production ceased. Its rear suspension had been reworked, the power went from 94 to 104 horsepower, thus becoming more efficient than the MGB and the Sunbeam Alpine, its two direct competitors (coupe and convertible).

The Vitesse sold well in all its configurations, which will not be the case with the Dolomite which followed it. 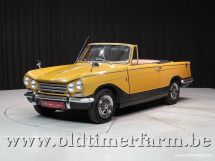 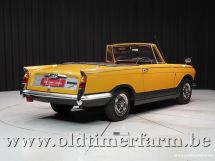